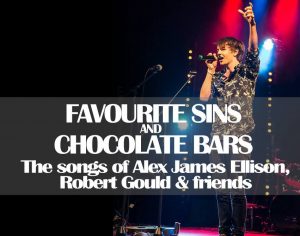 Actor/singer/songwriter Alex James Ellison, who recently supported Samantha Barks on her UK concert tour, will present a concert of songs with his music performed by himself and some special guests from the world of West End musical theatre at the Union Theatre on Sunday October 2.

Alex has performed gigs all around London and the UK, played roles in a number of Off-West End musicals, including “Apartment 40C” (St James Studio and London Theatre Workshop) and “Whistle Down The Wind” (Union Theatre), and starred in “Aliens Love Underpants” on tour and at the Dominion Theatre.

In “Favourite Sins and Chocolate Bars”, Alex will perform his own unique brand of music (described as “fun pop mixed with sincere singer-songwriter”) – including songs from his debut EP “Duvet Days” and his hit single “Chocolate Bar”. He will joined by guest vocalists, who will sing covers of his singer-songwriter catalogue (a number of which were co-written with actor-singer-songwriter Joe Sterling, who is currently playing Art Garfunkel in the International Tour of The Simon And Garfunkel Story) as well as numbers from the upcoming EP of songs he has written with Robert Gould (librettist/lyricist of the musicals “My Land’s Shore” and “A Pebble For Aaron”, which were named as finalists for the 2016 Stiles And Drewe Mentorship Award). The concert will also showcase some songs from the new Ellison and Gould musical-in-development “Texting and Tweeting – the Musical”!