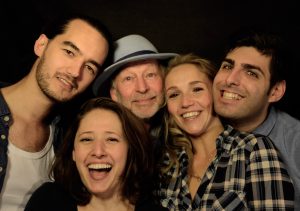 Tickets are selling for the next Snappy Title Spotlight event: Tim Thomas‘s music, featuring his band Authentic Blue, who will be performing at The Pheasantry, King’s Road, on Sunday 4th June.

Creating music and musicals can be a very tough and solitary business. Why not gather a group of bright souls together to share the dream? And two years ago that’s what happened. From various quarters I met a bunch of scintillating, unusual talents, singers and instrumentalists who did not want to compromise, who wanted to aim high. Three of them, Amie Miller, Nic Chiappetta and Connor Going already knew each other from the Royal Academy of Music. Suzie Aries was queen of the cruise-ships. So, now there are now five in the band. They thought of a name – AUTHENTIC BLUE.
They have a lot of laughs. They have dealt with all sorts of mishaps. They are very good friends. The group perform concerts, develop the shows, record Tim’s original stuff and they do covers. Material by the band is on YouTube, Facebook, Spotify etc., and they have performed in some wonderful venues. Working this way has liberated a lot of energies and, in the world of musicals, it is pretty unusual. As of today there are three musicals in development plus a couple of previously-produced works and you will hear songs from all of them.

📂This entry was posted in News Showcases
« Alexander Bermange’s Wit and Whimsy album goes to no.1 on i-Tunes “Zippy ruined my life!” Book now for Tim Thomas and Authentic Blue at The Pheasantry »