Alexander Bermange’s Wit and Whimsy album goes to no.1 on i-Tunes 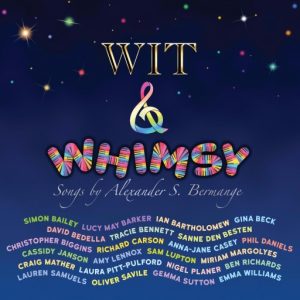 Alexander Bermange‘s new album of songs, Wit and Whimsy, hit the number 1 spot on i-Tunes’ comedy chart on the day of its release – appropriately enough on 1st April (and it wasn’t an April Fools prank!) Alexander’s songs have, of course, been featured in a number of NMN’s Snappy Title concerts in recent years.

All of the tracks are written by Alexander S. Bermange, who has acquired a formidable following amongst millions of radio listeners through his many appearances performing his comic songs on BBC Radio 4 and the BBC World Service. Further writing credits for which Alexander has achieved recognition include musicals and theatre productions that have been produced in the West End, around the UK and internationally.

Wit & Whimsy comprises Alexander’s most popular comedic musical creations from his stage shows and beyond. Many humorously depict aspects of musical theatre itself – such as Audition, A Serious Actor, The Opening Number, Stuck In The Ensemble, It’s Lovely Being A Luvvie, and I Wish That My Life Were Like A Musical. Others are portraits of crazy characters such as obsessive trainspotters, tone-deaf singers or would-be fairy-tale princesses; others are tongue-in-cheek celebrations of modern day technology, automated telephone answering systems, or the world of cinema; others take the form of tales with twists or tongue-twisting lists. They are all certain to amuse and entertain in equal measure.

Wit & Whimsy is now available as a deluxe 2 CD set from Dress Circle (http://bit.ly/WitWhimsy) and as a download from iTunes (http://apple.co/2lX41rh) on the Spectacular Music label. A live show featuring performances of songs from the album is being staged at The Hippodrome in London’s West End on Sunday 30th April, tickets for which are available at http://tinyurl.com/jpmudzo.